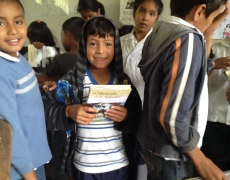 Greetings to all in Jesus Name!

The following are the very words of the Lord JESUS and they still true.  Luke 4.18-19: The Spirit of the Lord is upon me, because he hath anointed me to preach the gospel to the poor; he hath sent me to heal the brokenhearted, to preach deliverance to the captives, and recovering of sight to the blind, to set at liberty them that are bruised, to preach the acceptable year of the Lord.

A trip to the mountain with David Yoder

Last Monday afternoon, September 11th, my family and I traveled to brother David’s up in La Tigra, Siguatepeque. We were invited to go with him and a group from his church to a few villages up in the mountain above brother David’s.

Early in the morning brother David went around to pick up the brothers and sisters who were going to go to visit, he came back with a load of people which we divided in two pick-up trucks. After loading the boxes with Antorcha de la Verdad. (Torch of Truth booklet) we gathered to pray and left for the day. 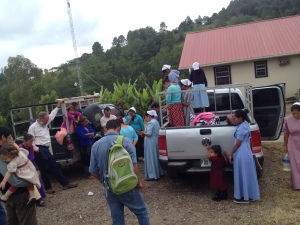 We started going up the rough road and after a while we arrived at the fist village school (La Danta 1). Many children were playing outside, then teachers and students came out to greet us and to welcome us. You have to understand this picture; the missionary (David Yoder) has come around doing this kind of thing for the last 14 years, since 2003. In the early years of his ministry here he only went once or twice a year because of the road conditions, a lot of them were only four-wheel drive roads and lots of them were not accessible with a vehicle at all. When he first started going up there,the roads were often not passable and things have improved very little all these years. The fruit of his work in the area has established a good relationship with schools and with this society.

I was amazed to see how kind and respectful the teachers and children were to us. The principal gathered everyone under the shade and we lined up in front of the whole school we first sang few songs, then hermano Miguel shared a bit and then I was asked to pray. After prayer our young people and others passed the booklets, a package of six Antorchas, to every child, while the others sang more praises unto the Lord. Brother David had told me sometime earlier that the teachers even use the Antorchas to assign home work to these children. 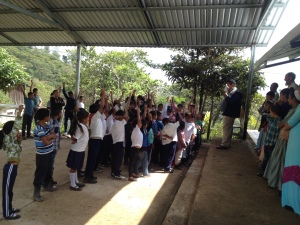 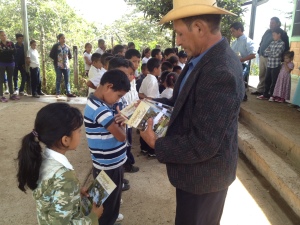 We left that school and continued driving to the next village (La Danta 2) where we found a very small school with a group of children; not even 20.

We then left the second school and we were on our way to the third village; (La Laguna) where we shared God’s word, sang, pray and passed the Antorchas. And their attitude was the same. Shy, respectful, quietly paying attention to what was said during the visit.

And after that third school in La Laguna we were on our way to our last village. (Matazano) After a while on rough roads we made it to Matazano, where some killings have been happening lately. Seems like two families are feuding in this community. 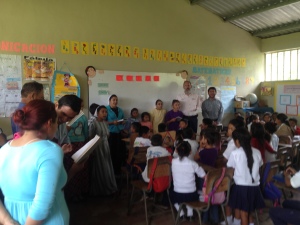 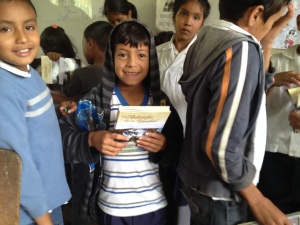 We were welcomed into the school and there we found around 150 students who graciously and quietly received God’s word. We sang and we passed the Antorcha’s. It is worth it to mention again that the teachers and students are so respectful and cooperate about God’s word. It is very rewarding to go to a place where God’s word is so welcomed.

After we were done at that last school it was lunch time, so we ate the lunch that some of the sisters had brought for us all and then the one brother from that village joined us to go visit some families in the community. 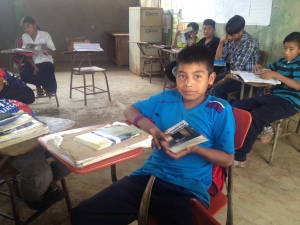 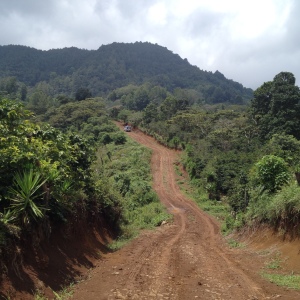 How did they come to know the people up in this village? It was through sister Rina and sister Alicia from the church at brother David’s, who go to the Siguatepeque market to sell their bread once a week. One of those market days is when they met the people from the Matazano village. At least three months had gone by since they met at the market that very first time and now we were sitting in their houses sharing about the Savior’s love for them.  God’s thoughts and ways are too high for our minds to comprehend.

The rest of the afternoon towards the evening we visited at least four families. Some of the ones we visited are involved in the later killings, some are offenders and some are victims. We prayed with an older widow who has lost some of her children and her husband. She has lost 4 children and her husband, if we are not mistaken all of them were assassinated except one or two of the children. As she was telling us the story I thought of the wounds, the scars, the pain, the sadness, the horror of death that is consuming her life. I felt the necessity in her behalf to cry out to THE ONE who can DELIVER, the ONE who can give her comfort and hope, the LORD JESUS. Jesus is able: “to heal the brokenhearted, to preach deliverance to the captives, to set at liberty them that are bruised.” 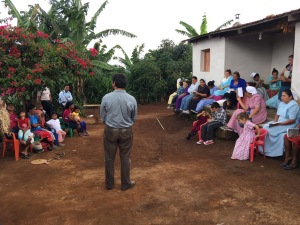 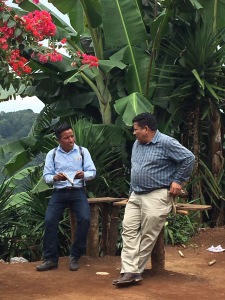 We drove and left the trucks at the foot of the hill and walked about 20 minutes to get to the last two houses we visited. In both households they listened attentively to God’s word. We believe without a doubt that God desires reconciliation for these families, for this community, and for the world.

By the time we started leaving the village was already getting dark. And soon after our last stop in the village, the rain started pouring down. We got to a point where the road was steep and slippery and a good size cliff was all the way on our right side. To slip over that cliff could have been disastrous. So, we stopped at the top and waited on the rain to cease a bit. We all prayed for God’s wisdom and protection over our lives. There were at least 20 of us in all. We waited in the truck for about 30 minutes, then some of us went with very little light and in the rain to inspect how slippery the road was before we attempt to get down the hill with the trucks. We prayed one last time and very slowly brother David went first. Thank the Lord, we made it back home safely that night.

May the Lord give brother David and his team wisdom to proceed with ministry up in those villages, and most of all may the Lord receive glory from people that will decide to follow Jesus on that mountain.

“May the Lamb that was slain receive the reward of His suffering!” 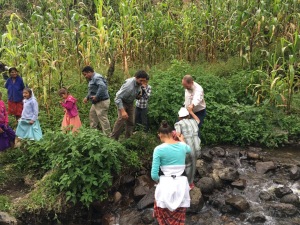 Crossing the creek on our way to the last two houses 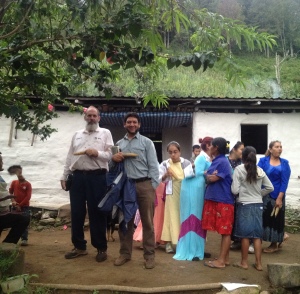 Enjoying corn at one of the homes

I might add some comments from the mother of those who are accused of some of the killings.  When we were at her home in the photo above, she said “God wants to save us. God was us to put out this fire.”  It seems like both sides are tired of this life of revenge. Several of us would like to go back and visit again on Monday. We would like to visit several of those that seemed close to the point of repentance and see if we can help them find peace. We want to thank you all for your prayer. God bless.  David Yoder