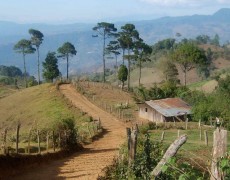 This is an article borrowed from Eternal Perspectives by Roman Troyer.

In the spring and summer of 2001, Tim Brechbill and I spent several evenings poring over a large map of Honduras at his house in Peña Blanca. One area that had always intrigued us lay in the western part of the country; the southern end of a state called Lempira. It looked like a very ruggedly mountainous region and a large part had no roads through it – not on the map, at least – but it appeared to be full of villages. We dreamed of the day when we would go there to discover whether any evangelistic effort had been made.

In late 2001, when Dale Gish and his family visited Honfuras, Tim, Dale and I decided to make a quick trip into southern Lempira and see what we could discover. We followed a road that appeared to take us to the region with no roads. When we arrived at the small town of San Manuel Colohete, we asked where we could find the pastor of the evangelical church in town. After a brief visit with him we left, satisfied that the gospel had been preached at least in some places of Lempira.

When I made mention of Lempira to a team of young people who came to Honduras in early 2002, two of them felt compelled to join in an exploratory venture we planned for May 2002. Since we still did not know what we would find, we left prepared to find anything from totally pagan villages to villages where Christ was actively being preached and lived out. Four of us spent almost two weeks hiking and riding trucks from place to place to discover what we could. In each village, the first person we asked for was the pastor of the evangelical church – if there was one. In many cases as we visited churches, the inevitable question was, “Why have you come?” Since we didn’t really know ourselves – except that we had felt compelled of God to be there – we answered that we wanted to know if there were any churches and, if so, what we could do to encourage them and help them. It wasn’t long before we saw that the difficult financial situation of Lempira kept many of them from purchasing or owning a Bible. I will vever forget one church we visited where, after we made our introduction and told them why we were there, the pastor said, “I don’t think we need any help because we have all we need here,” and waved his Bible in the air. I answered that I thought he was exactly right, and that we could possibly be of help in that respect since we had noticed that only about 10% of the adults present had Bibles. Immediately half a dozen people ju8mped to their feet and started firing questions at us: “How much will they cost?” “When can you bring them?” “How many can you bring?”

And so we planned our first Bible distribution trip for September of that same year. As a last proof of God’s hand in this, we decided not to mention our plans to anyone and see if God would provide the necessary funds for Bibles. Our estimate was 500 Bibles at about $1.50 = $750. Within two weeks, I received an envelope with $1,000 cash from a rather bewildered States-side donor who said he either had to let go of the money or his peace!

We expected to visit all the churches in the districts of San Manuel and San Sebastian in about a month with 500 Bibles. Once we started, however, the churches seemed to multiply as we discovered more and more of them in out of the way villages. In the end, we spent about two months distributing 1,100 Bibles in 53 churches.

We also ordered a pallet of reference Bibles, Bible dictionaries, Bible handbooks, and concordances from Mount Zion Literature Ministries, which we sold at subsidized prices. The whole project ended up costing more than twice what we had anticipated, but God provided the money we needed at every step and, on several occasions, the exact amount the very day we needed it.

The procedure we followed was to take an initial survey of all the evengelical churches in a municipality and contact the pastors to arrange visits to their chruches. At each church we would give a certain amount of Bibles – depending on the size of the church – and a Bible story book for Sunday school. We also offered the reference Bibles and Bible dictionaries for sale: usually we gave a brief introduction to each and told the people how they could be used. After visiting all the churches in a municipality, we set up a little bookstore with a trusted individual – who sold the books at cost – for the sake of those who couldn’t buy while we were there. We saw tears of gratitude from many men and women who had never had a Bible of their own before.

God has promised that His Word will not return void, and we believe that among those who have acquired Bibles of their own, many are reading them and seeking Christ, and so He will be found of them.